Sea Kayaking with Whales in the San Juan Islands

Orca whales, also known as Killer whales, are perhaps the most iconic symbol of the San Juan Islands of Washington State. Every summer thousands of visitors come here in hopes of catching a glimpse of these beautiful animals, and sea kayaking with Orca whales is one of the most highly sought after experiences.

The San Juan Islands are blessed with two populations of Orca whales that move through the area. One group is called the “Residents” and the others are known as “Biggs”, or “Transient” Orca whales. The Residents are fish eaters, while the Transients primarily feed on mammals such as seals and porpoise. These two whale populations makes the San Juan Islands one of the best places in the world to see Orcas.

Nothing quite compares with the feeling of floating in a kayak on the surface of the water and seeing a family of whales passing by. Occasionally the sounds of their songs can even reverberate through the hulls of the kayaks and, because we move silently, the sharp sounds of their breathing pierces the air. The additional thrill of being in proximity to such a large and intelligent creature is truly a world-class experience.

One of the most common questions that we get asked every year is “Are we going to see killer whales?” It’s a really good question that we feel needs to be answered as accurately as possible.

Anacortes Kayak Tours operates tours throughout the San Juan Islands, we don’t just depart from one location. Every day during the summer months we have guests all over the archipelago which means that if there are whales moving through the area then it is likely that one or more of our trips are going to be somewhere close by. Our longtime association with the Pacific Whale Watch Association also gives us access to the latest sighting information and so we often know well in advance that the whales are present.

Even with these advantages there are difficulties with making claims about the potential for “kayaking with whales”. The main reason is that Orca whales rarely stay in one place.  They are fast and constantly moving, and can often cover more than 100 miles in a single day. By contrast relatively slow moving sea kayaks cover far less territory, with 5-10 miles being the average distance travelled per day.  What this means is that no kayak outfitter can promise a whale sighting on any given day. There is a huge element of just getting lucky and being in the right place at the right time.

What we can feel comfortable telling you is that if the whales are in a place that might allow you to encounter them then we will likely know about it, and can pass the information along to your trip leaders so that they can help get you into a good position to see them.

Why is whale watching in the San Juan Islands so popular?

The last 30 years has seen the interest in whale watching growing worldwide, and the San Juan Islands are no exception.

Part of the reason for our popularity is that there were many summers when the Resident orca whales travelled like clockwork around the San Juans. We could often accurately predict where they would be simply based on what the tidal currents were doing. One predominant travel pattern those days was a clockwise circuit around the islands. They would very often be seen on the west side of San Juan in the morning and afternoon before moving north into Canada and looping back down the east side of the archipelago near Anacortes. The west side of San Juan Island became synonymous with Orca sightings and they even nicknamed a state park there “Whale Watch Park”.

The regularity of whales being present allowed for a robust eco-tourism industry to develop in Friday Harbor on San Juan Island.

In the last few years this pattern of movement has changed dramatically with the whales appearing less and less frequently near San Juan Island. The fabled “west side” of San Juan Island, once considered one of the best places on the planet to be able to see wild Orca whales, has perhaps been the most affected by these changes. The Resident orcas are choosing different areas to forage and are spending much less time there.

What does this mean for kayaking with whales?

Luckily, for whale enthusiasts, there has been another remarkable change in the San Juan Islands, particularly near Anacortes on the east side of the archipelago. While the sightings of Southern Resident Orca Whales has declined, the population of Transient (Bigg’s) Orca whales has exploded. Additionally there is a fast growing resident population of Humpback whales in the Salish Sea. For our guest this has resulted in a dramatic increase in the number of whale encounters on our kayak tours departing from Anacortes. Unlike the Resident orcas the Transients do not move around in a predictable pattern based on tidal currents and so when they are around we can see them at any time of the day.

Sea kayaking with whales is all about good luck and good timing.

Although we paddle in areas where whales frequently are found, we don’t want to build up your expectations of whale encounters just to sell you a tour. Our belief is that nobody can make promises about wildlife sightings and we know how much you will enjoy the trip regardless of what animals are in the area when you join us. We would rather earn your business by providing a unique product in a remarkable area. Our guests love our trips and many come back year after year.

We do get lucky and kayak with whales during the summer months, but the frequency and proximity of those sightings is determined by the whales, not us. When we do see whales you can also be comfortable knowing that our guides will always act in a manner that protects the whales’ best interests. We are interlopers in their homes and so we want to be respectful of their space.

Kayaking with whales, in our opinion, should remain what it always has been…an unbelievable bonus to an already great kayak trip in the San Juans. Sea kayaking is a great way to experience the San Juan Islands. Nothing else gets you closer to the place, physically and spiritually.

Whether you decide to come out with us, or some other kayaking outfit, we certainly hope that your experience is entertaining, educational, and something that you will want to do again. And we hope that we helped shed some light on the subject of kayaking with whales in the San Juan Islands.

Please call if you have any questions or concerns. 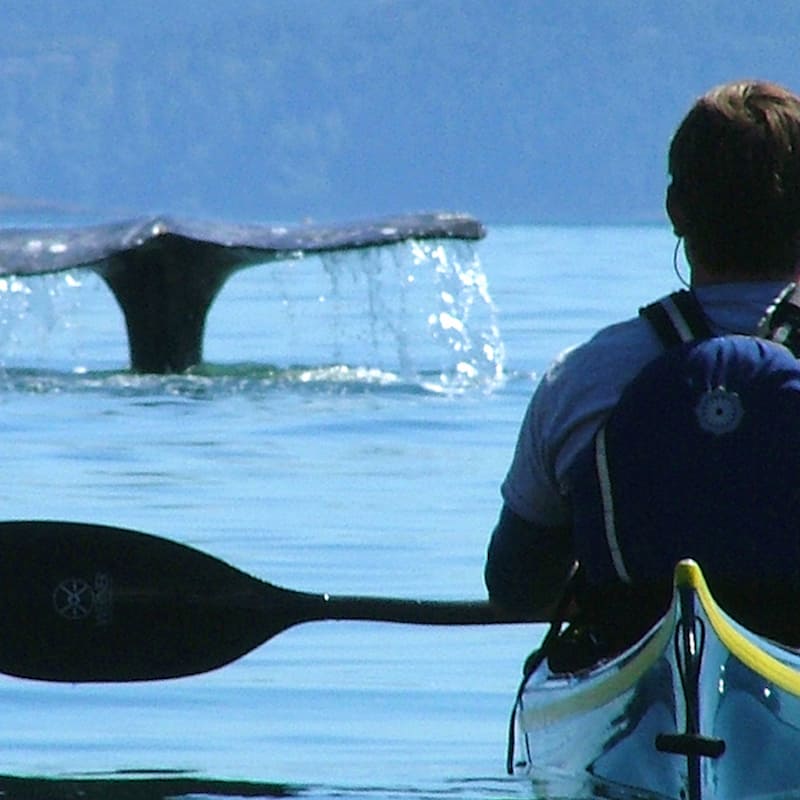 Kayaking with whales, in our opinion, should remain what it always has been…an unbelievable bonus to an already great kayak trip in the San Juans.Erik Schorr